Meet the fish of the river Wandle! 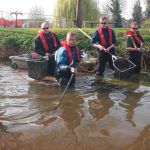 * EVENT CANCELLED BECAUSE OF HIGH RIVER LEVELS AFTER RAIN AND POOR RIVER VISIBILITY. APOLOGIES FOR DISAPPOINTMENT *

Come down to the river Wandle, and see what fish we find! Learn more about fish in London’s rivers and how to identify different species.

The middle Wandle contains a selection of coarse fish including barbel, chub and dace. Fishery officers will be carrying out a fish survey, by wading in the river enabling us to understand the fish populations on the Wandle.

The fish will be weighed, measured, a scale taken for age analysis, and then released unharmed back into the river. This method provide quantitative and semi quantitative assessments of the fish populations in the river.