Wet wipes have risen to the top of the list in our Thames River Watch litter monitoring results, according to our latest research.

Plastic bottles remain prominent, while the percentage of microplastic and unidentifiable plastic has increased.

Between the start of 2015 and Dec 2017, our volunteers have conducted 102 detailed litter surveys to uncover the type of litter present in London’s iconic river. The survey method was developed in partnership with Marine Conservation Society (MCS) to help address the lack of evidence on how much litter is entering the river, how it is getting there and what impact it may be having.

<— Back to Thames River Watch

The top 10 items and recommendations

The top 10 items (excluding unidentified objects) found by volunteers on the Thames foreshore account for around 80% of all counted items, providing a clear list of items to target.

Of these top 10, four are easily avoided via simple policy changes. These are: 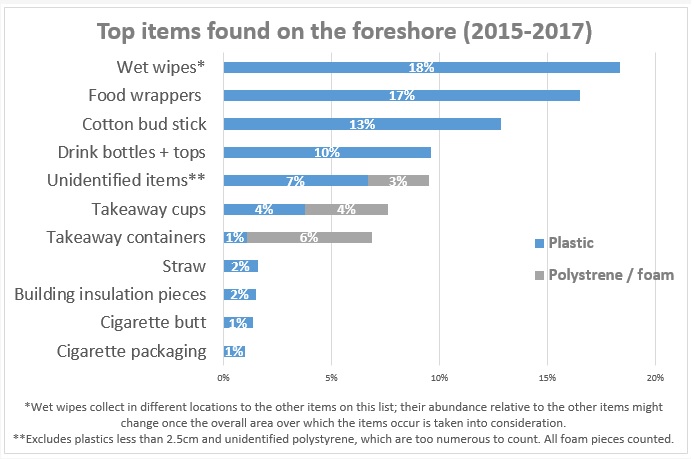 Wet wipes, which contain plastic, are among the most common items found by Thames21 volunteers on the Thames foreshore and Government has pledged a ban on them. They also occur over large areas and in very high densities (on average 45 per square metre in the concentrated zones where they are found).

NB: This result does not mean necessarily that wet wipes are the most common item on the Thames foreshore. Wet wipes collect in different locations to the other items on this list (sinking rather than floating litter hotspots), and in order to have a better sense of which items are the most common, we would have to take into account the overall area over which the litter occurs. As there are very large areas of floating litter in the saltmarshes of the wider estuary, which haven’t yet been surveyed in detail, the abundance of wet wipes relative to the floating items might change once the area over which the items occur is considered.

Unidentified items make up a very significant proportion of the total litter items found – 10%. This excludes unidentified small plastics less than 2.5cm and unidentifiable pieces of polystyrene, as these were often too numerous to count.

These items were unidentifiable normally because they had broken down into indistinguishable items. Therefore, the issue of micro-plastics in the Thames environment remains a significant issue which is likely to persist unless innovative methods, other than litter removal, are used to remove them. 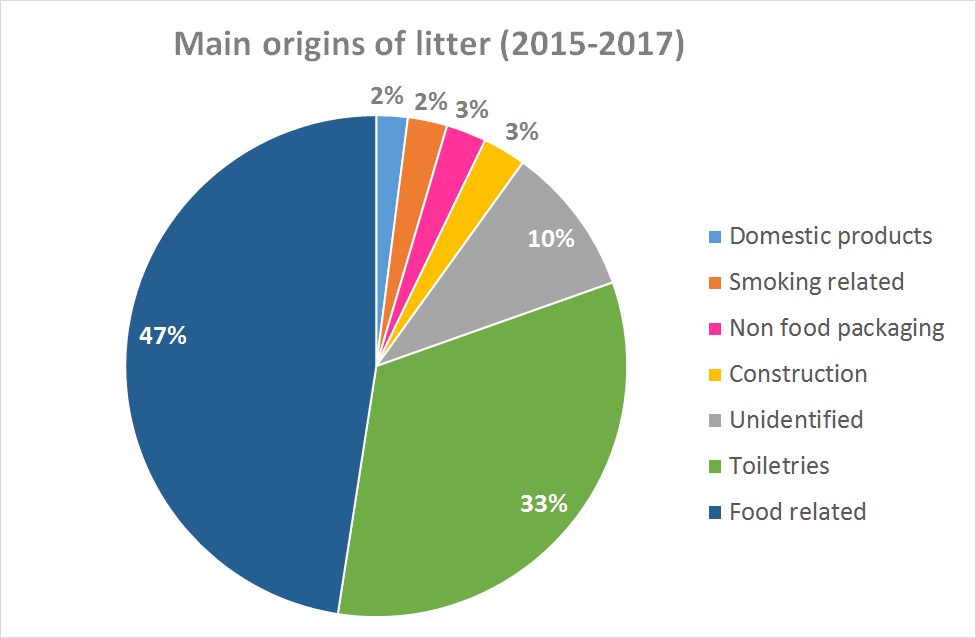 Sewage related toiletries (including wet wipes) are a much bigger proportion of the litter on the Thames than previously understood, accounting for a third of all items recorded to date.

The main difference in the surveys carried out in 2017 compared to previous year’s statistics was the organisation of the Big Wet Wipe Count in April 2017. In this, 50 members of the public helped us complete nine litter surveys in one day at a sinking litter hotspot in Barnes by Hammersmith Bridge. This is a notorious collection point for wet wipes and greatly increased the counts for that item in our dataset, to what we think is more reflective of the true situation (see above for clarification).

This highlights the growing need for measures to prevent wet wipes containing plastic ending up in sewers.

Wet wipes are partly made from plastic compounds (such as polyester and polyethylene) and are therefore a significant contributor of plastic to the river. The highest concentration recorded to date was on the south side of Hammersmith Bridge, where 278 wet wipes were found in 1m2, counting those found on the surface only.

Construction litter is more prevalent than previous years; this is mainly due to insulation foam which is finding its way to the river and breaking into small pieces.

Types of plastic drinks bottles found in the Thames 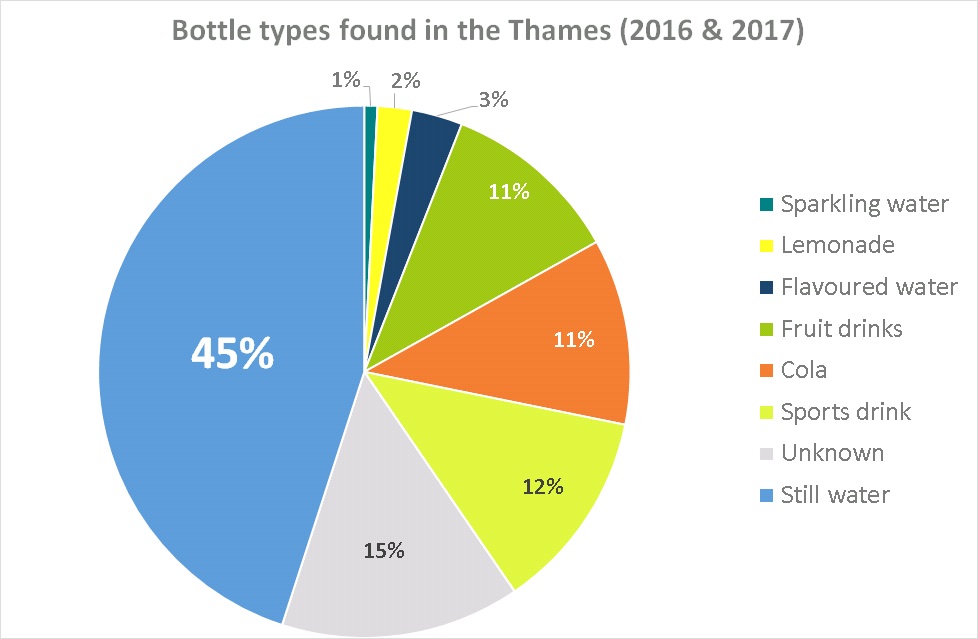 Still mineral water represents by far the most common single-use plastic drink bottle found in the Thames, making them an important pollutant in the Thames at 45% of the total number of bottles found, minimal change to the 47% found to the end of 2016.

Plastic bottles and their bottle tops account for 10% of items found in the Thames. Of those, bottle tops are 7% and bottles themselves 3%. This is because the bottle tops break down into smaller pieces more readily.

This data was collated in two separate events (September 2016 & 2017) by volunteers who tallied all the brands for more than 2,000 bottles recovered from the river’s foreshores after our Big Bottle Counts in those years.

The distribution of drinks bottles in the Thames

The natural salt marshes in Essex and Kent are major spots for floating litter such as drink bottles and food wrappers. This greatly harms their amenity value greatly and could also be having adverse environment impacts.

In a separate data strand to the litter monitoring results pie charts above, volunteers have collected 37,000 bottles between April 2016 and April 2018, a period during which Thames21 and the #OneLess campaign, run by ZSL, have kept an overall record.

This is just the number that has been recorded. Others will have been removed in general clean-ups that did not separate types of litter. One of our volunteer Badged Groups focusing on the Concrete Barges site in Rainham has collected just under 19,000 bottles since September 2017. 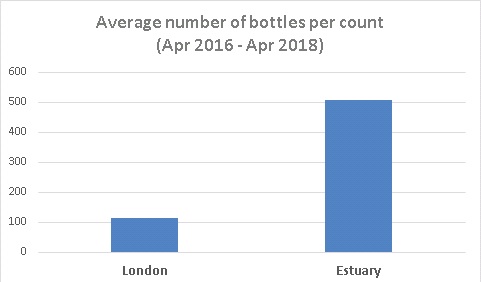 It is clear that the number of bottles found in the wider estuary (defined as east of Thamesmead) far exceed those in London. This is down primarily due to the occurrence of large areas of saltmarsh in the wider estuary which collect the litter after a high tide recedes.

There is anecdotal evidence that plastic rubbish on the saltmarsh is preventing reeds and other natural vegetation from growing; in areas where litter has been removed, local volunteers report vigorous growth of natural vegetation which had previously been stunted. 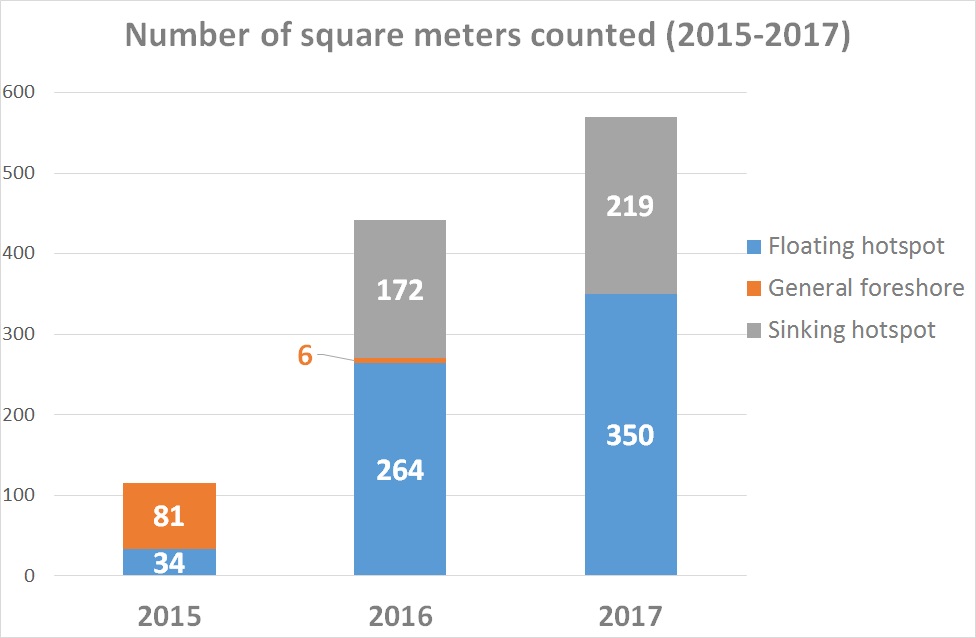 Volunteer surveys are continuing to increase annually. In 2017, their 48 surveys accounted for almost 600 square meters of area. This is a huge number given the amount of time it can take to count the items in each square. We remain very dependent on, and grateful to, our committed volunteers for making these summary reports possible.

Sinking hotspots were surveyed approximately one third less than floating hotspots, because the surveys have to be timed careful to be there at low tide. Nevertheless, the wet wipes found in nine surveys carried out at the Big Wet Wipe Count in 2017 propelled them to the top of our chart for most items found.

The location of litter on the Thames

Litter in the Thames is no longer distributed randomly throughout the foreshore; it occurs at a specific sites in very high concentrations (which we call litter hotspots) due to the way the plastic litter is carried by the river. Floating litter creates strandlines on slipways and on marshes; sinking litter ends up on the inside bends where the water moves slower.

Thames21 volunteers have been clearing rubbish from the river since the 1990s, removing evidence of years of neglect, particularly big clunky items (e.g. shopping trolleys & tyres). But we have noticed a big rise in the amount of plastic litter in the Thames over this time. The litter occurs at specific sites in very high densities.

Floating hotspots occur where there is suitable surface for the receding tide to leave behind a strandline (such as slipway, beach or a marsh) and includes items such as food wrappers, takeaway containers, drink bottles & cotton bud sticks.

Sinking hotspots occur on the inside of a bend in the river when the water slows down and some items come out of suspension. From Vauxhall Bridge westwards, these sites mostly consist of wet wipes & sanitary products; east of Vauxhall Bridge, we mostly find submerged plastic bags, both industrial and domestic, which fill up with mud and become embedded in the river bed.

Surveys were conducted at various locations along the Thames categorised as:

‘Sinking hotspots’ – litter accumulates on the bed of the river and deposits at the low tide line. These hotspots often show consistent numbers of microplastics in the sand and mud and are also where most wet wipes, sanitary products and plastic bags are found.

‘Floating hotspots’ – litter accumulates at the top of the foreshore by floating up with the tide. These sites often accumulate densities of plastic bottles, polystyrene and food packaging.

‘Foreshore reaches’ – These are more typical areas of Thames foreshore which do not attract large densities of litter but where litter is certainly present. We consider foreshore reaches to be more indicative of the litter along the Thames as a whole. These sites will often contain a mixture of sinking and floating litter items.

Using the maps: Select the litter category you are interested in by clicking the headers below. To display results, hover the mouse on a point or view the full survey by clicking on a data point. A colour-coded key is below the map.

This category refers to any litter that is expected to have been discarded down a toilet. This includes baby wipes, sanitary towels, cotton-bud sticks, nappies and syringes.

During our foreshore clean-ups on the Thames, we consistently find fragments of plastic that has already begun to degrade and so cannot be identified. Such plastic fragments are frequently ingested by wildlife and present a significant threat to their health. 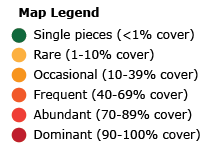 Fragments of polystyrene that have begun to degrade are frequently found on the foreshore and present a significant threat to wildlife. Although it is often not possible to identify the source of the polystyrene (e.g. food related or other source), it is important to record the presence and abundance of the material to understand the scale of the challenge they present. 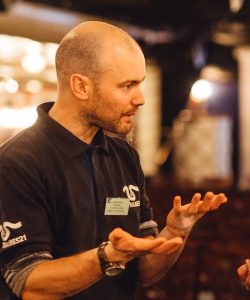