The plants and animals found in tidal stretches of rivers are incredibly well adapted to tolerate large changes in conditions, which they experience daily due to the tide and inputs from fresh- and sea-water. Nevertheless, even these species are vulnerable to changes in certain water quality characteristics (or ‘parameters’). Discharges to the river, such as industrial waste or domestic sewage, can dramatically change key parameters and make the river unliveable.

The maps below show the most recent results of some of these parameters that our volunteers have measured.

While surveys showed that water quality in the Thames was stable, 92% of samples revealed a significant presence of coliform bacteria. On occasion (1%) the surveys flagged dramatic drops in dissolved oxygen to levels that threaten aquatic life.

These findings point to storm-water sewage pollution entering the Thames and impacting the river’s water quality.

London has a combined sewage system – meaning that rainwater and waste water flow together in the same pipes. This system was built for Victorian London when the population was far smaller. The capital’s sewage system is stretched to capacity by carrying the sewage produced by London’s modern day population. When it rains, the pipes which are already full, do not have the capacity to hold the rainwater as well. Currently to avoid rainwater and sewage from flooding our homes, the mix is discharged into the Thames and is known as storm-sewage pollution.

The Thames Tideway Tunnel is addressing this issue. Find out more here.

Using the maps: Select the parameter you are interested in by clicking the headers below. To display results, hover the mouse on a point or view the full survey by clicking on a data point. A colour-coded key is below the map. 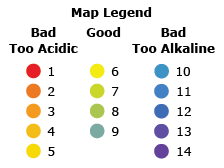 For the Thames to support a variety of wildlife, the water mustn’t be too acid or alkali. In the past, the pH of the Thames would have been affected by pollution from industry, killing all wildlife. These days, we would expect the water to be neutral (neither acid nor alkali) which is better for wildlife. Volunteers measure the pH of the water to find this out. 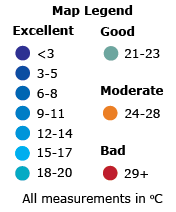 High water temperatures can have a negative impact on river life – both directly and by reducing the amount of dissolved oxygen that the water can hold. Unnatural warming of the water is called ‘thermal pollution’. In the past, this would have been discharged directly from an industrial source (such as power stations like Battersea).  These days, a possible source is rainwater run-off, which is heated up as it moves across the warmer roads and ends up in the river. 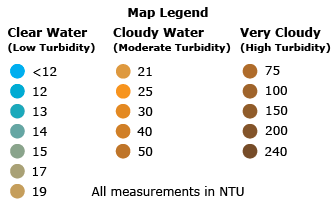 Volunteers record how much algae, soil particles and other tiny substances are carried in the water. This is called turbidity and it is a measure of how far light can travel through the water. Turbidity reduces the light available to plants for photosynthesis and can increase water temperature (as particles absorb more heat). The particles can also affect fish directly by clogging their gills. On the tidal Thames we would expect it to be muddy and turbid but it is important to measure because of its possible impacts when conditions are particularly poor. 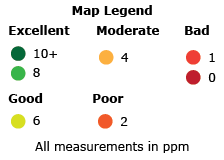 Volunteers measure the amount of dissolved oxygen (DO) in the water which tells us how much oxygen there is available for river life to use (e.g. fish and insects). Dissolved oxygen is measured in ‘parts per million’ (ppm); high levels (above 10ppm) indicate a healthy river. When untreated sewage is discharged into the Thames, microorganisms use the dissolved oxygen to break down the sewage meaning that oxygen is no longer available for other forms of life. This can lead to large scale fish kills such as those in 2004 and 2011, when thousands of fish died after sewage entered the river.

Volunteers carry out one-off tests to indicate the presence of coliform bacteria which are found in the intestinal tract of animals and humans. Although harmless themselves, they can indicate presence of pathogens and viruses. These enter the water when there is sewage or animal waste discharged into the Thames.