Thames21 was involved in a hugely successful restoration project in Queensbury Park from 2014 to 2016. The charity delivered community and school engagement, helping local schools and residents build lasting relationships with their new site.

Queensbury Park is a beautiful 6.8 hectare park in Harrow including a playground, exercise equipment, and plenty of open space to enjoy. The site has been an accessible green space since it opened in 1936. 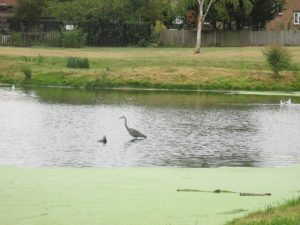 In 2014, Harrow Council began restoration works on the site. Kenton Brook was widened and diverted through the park, winding a course through natural banks and connected to a new wetland. The renaturalised brook and the wetland provide new habitat, as well as functioning as natural flood storage. After two years of work, the site was officially opened on May 17, 2016.

The work involved Harrow Council, Thames21, Thames Water, and the Greater London Authority. It is part of ongoing partnership between Harrow Council and Thames21. During the project, work was also carried out on nearby Stanmore Marsh. 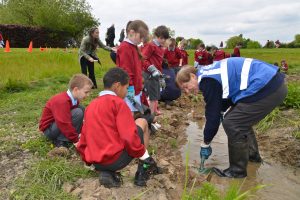 Throughout the project, Thames21 worked with residents and schools to help connect people to Queensbury Park and Stanmore Marsh. Numerous events took place at Queensbury Park, including clean-ups, bulb planting, vegetation management, and school sessions. Local schools made great use of the site, and Thames21 ran teacher training to keep this going after the end of the project. Overall, Thames21 made  more than 14,000 engagement points during the project, including just under 12,000 with school children.

To keep Queensbury Park in good condition, a friends group was established by Thames21 to look after the park in the long term. Anyone interested in joining Friends of Stanmore Marsh, please contact Eddie O’Kane. To learn more about parks and friends groups in Harrow, visit Harrow Parks Forum.

Queensbury Park is accessible via Honeypot Lane, HA7, and Clifton Road, HA3. It is open every day from 9am to 5pm. The nearest tube station is Queensbury, which is served by the Jubilee Line.