In the 1930s, the stretch of the Gores Brook which flowed through Parsloes Park was channelled through a pipe and buried. This process is known as ‘culverting’ a river. The brook now runs in culvert for approximately 430 meters under the eastern section of Parsloes Park. What is left is an area of grass that is currently open, exposed and featureless. When a river is culverted, the wildlife that relies on the river is lost, and people can no longer use the river as a place to walk, play and relax.

To learn more about Parsloes Park and the buried Gores Brook, visit our interactive StoryMap.

Parsloes Park, in the London Borough of Barking and Dagenham, is a vitally important green space within one of London’s most deprived boroughs, representing 12% of the total open space for the borough. On a very dry day, when the grass is cut short, aerial images show the faint outline of the ghost of the Gores Brook that once flowed through the eastern section of the park.

Thanks to the support of the Mayor of London’s Green and Resilient Spaces fund, Thames21 is working alongside the London Borough of Barking and Dagenham and London Wildlife Trust to develop plans to uncover the Gores Brook, returning it to its former glory within Parsloes Park.

What are the expected results?

If successful, the development phase of this project will facilitate the creation of a riverside park area through Parsloes Park by uncovering the buried Gores Brook. This would transform the eastern section of the park into an area rich in recreational and biodiversity value for local residents from the nearby Becontree housing estate.

De-culverting Gores Brook through Parsloes Park would expose the river to daylight and allow it to adopt its original alignment. This would be coupled with the addition of new meanders and riffles that would slow the passage of water in times of flood, as well as new on and offline ponded areas/scrapes that would act as additional areas of water storage and habitat. In addition, new areas of riparian habitat including areas of reed, wet meadow and wet woodland could be created, with the latter complementing the existing mature, former riverbank trees that are present within this area of the park.

These works would be complimented by the creation of safe points to access the ‘daylighted’ brook in the form of boardwalks and bridges, which would be linked to a wider network of paths.

The project should help to address localised issues of flooding and water quality, provide wider climate adaptation benefits such as addressing drought and overheating as well as creating more nature-rich spaces, bringing wildlife to the people.

Some of the key goals of the project include: 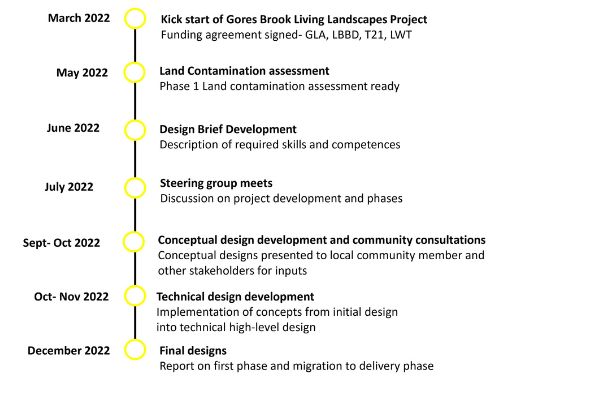 The actual designs for this project are yet to be discussed and decided.

We need your help with this!

An online consultation will be going live soon. Keep an eye on this page for updates.

What is the long-term vision?