Thank you to everyone who ran – or took part in – events for London Rivers Week 2021, from October 23-31 2021. You were part of a throng of about 1,500 people who enjoyed rivers or learnt about the benefits they can bring, by joining in walks, talks, open events and webinars.

If you were inspired by the themes – access to nature, health and wellbeing and climate resilience – now YOU can get involved in conservation work across a wide area of London via the campaign partners.

The annual campaign, begun in 2016, is run on behalf of the Catchment Partnerships in London (CPiL), through the London Rivers Restoration Group. This has celebrated how 40 river restoration projects have taken place since 2000. These have restored rivers, canals and streams and created new waterways such as wetlands, that have boosted numbers of inumerable species of wildlife, lifted people’s spirits by providing wonderful public spaces for people to enjoy and provided defences against pollution, flooding and drought in various ways.

During London Rivers Week 2021 an “opportunities map” was revealed, pinpointing more than 140 sites across London’s boroughs where further river restorations could take place, if funding can be found. 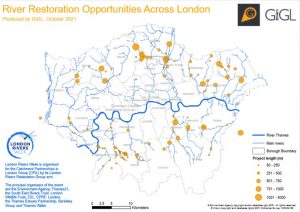 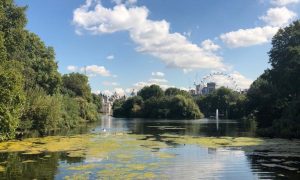 If you missed out on London Rivers Week, there’s still a fabulous chance for budding photographers of all ages and standards to ‘capture the magic of London’s waterscapes’ and enter the #PictureBlueLondon competition, run by CPRE London, the countryside charity. With fabulous prizes to top London attractions, judges will be looking for uplifting images from around the capital. The contest runs to November 26.

Did you know London has 400 miles (about 640km) of waterways – from rivers to wetlands, streams and canals? Since 2000, about 28 miles (45km) has been restored. We’ll be celebrating some of those successes. But CPiL has set the target of raising the rate from about 3km on average per year to 5km by 2025 and beyond. If we did that, we could transform a third of the capital’s waterways by 2050.

To go with the map and to whet the appetite, we’ve put together a short list of case studies of “ready to go” river restoration projects: venues explored are: A flood alleviation scheme in Norbury Park, Croydon; the “Catchment Reset” of the Salmons Brook, Enfield; returning the Gores Brook to Parsloes Park, Dagenham; Reclaiming the Riverside in the Crane Valley; and RiverWise, a nature and community recovery project in Lewisham.

Many of the webinars we ran during October were recorded and can be accessed again.

Here are the ones put on by Thames Water:

These were put on by the Environment Agency:

These webinars were led by CPRE London

London Rivers Week will be back in summer 2022. If you can’t wait, why not explore some of London’s great blue green spaces by enjoying our self-guided walks that were put together for London Rivers Week 2020?

London has nearly 400 miles of waterway – that’s the same distance as from Brighton to Edinburgh. Over the past 20 years, more than 20 miles has been ‘rewilded’ or restored. Rewilding can involve simple actions such as adding woody material to a river, or removing concrete and metal from its banks. It can also mean giving rivers more space to flood over water meadows, or creating new wetlands beside them. It can even mean daylighting stretches of rivers – bringing buried rivers into the light once more. London has examples of all of these, and you can find them through the map below.

Click on the ‘River restoration sites’ tab to explore rewilded river sites. If you click on the time slider icon (top-right) you will see how much river has been rewilded in the past 20 years.

Self-guided walks: click on the ‘self-guided walks’ tab to explore the walks that you can take along London’s rivers. Many of them will take you to some of the restored river sites.  Click on a walk or on a restoration site from the list (on the right hand side) and the map will zoom to the location and a pop-up window will show with more info.

Jubilee Greenway: a 35 mile circular walk joining the Thames, several of London’s parks and waterways including the Grand Union Canal and the River Lea

Dollis Valley: 10 mile walk between Green Belt and Hampstead Heath taking in the Dollis Brook, which eventually joins the Mutton Brook to form the river Brent

Grand Union Canal Walk: Walk the London sections only or take time out to do the entire walk from Brentford to Birmingham!

River Moselle Walk: From the northern heights in the west to the river Lea in the east, the route of the Moselle river connects nature reserves and green spaces and is responsible for the saying ‘Highgate’s rain is Tottenham’s pain’

Hogsmill River Walk: Walk in two sections from its source at Ewell to Tolworth and from Tolworth to where the Hogsmill joins the Thames at Kingston

River Ravensbourne: This illustrated walk covers approximately 4 miles from Catford to the Thames

The Thames Path: 79 miles, divided into four sections on both the north and south bank: from Richmond’s lost floodplains to the Dickensian stretches of the eastern marshes

Wandle Riverside History Walk: 4.5 miles long, this walk takes you past historic pubs, notable industries and to the spot where the Wandle joins the Thames

The Wandle Trail: From East Croydon to the Thames

Discover the Source of the Wandle: 1. Carshalton

Discover the Source of the Wandle 2: Croydon

Discover the Source of the Wandle 3: From Carshalton to Croydon

View the fullscreen version of Fish Migration map at fishroadmap.london

The catchment partners have compiled a list of case studies of river restorations which have taken place in recent years and the benefit they have brought to wildlife and people, courtesy of partners such as developers, councils, governments and environmental groups. Read about these ‘secret wild spaces’ on our dedicated web page.

Guide to the capital’s dragonflies

Watch our Restoring River Brent video – all about the history of the Brent and the restoration work we are doing to bring it back to life!