Sewage, microplastics and food packaging are among the top culprits impacting the Thames according to new findings from our Thames River Watch. Thanks to this new data set produced by our Thames River Watch citizen scientists, the current health of Britain’s most iconic river is now better understood than ever before.

Food-related packaging is responsible for 74 per cent of all litter found on the Thames – with wrappers the most commonly found. Worryingly, these wrappers are swiftly breaking down into smaller and smaller pieces; adding to the global microplastics problem.

Meanwhile our water quality surveys show that 92 per cent of water quality samples revealed a significant presence of coliform bacteria, and occasional samples (one per cent) showed life-threatening reductions in  oxygen levels. Both findings point to the impact of continued sewage pollution in the Thames. 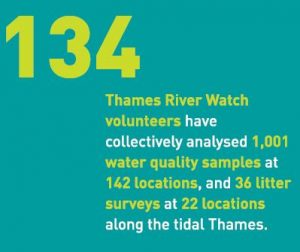 Since Thames River Watch volunteers began in 2014, our intrepid volunteers have collectively analysed more than 1000 water quality samples at 142 locations, and conducted 36 litter surveys at 22 locations along the tidal Thames.

Their efforts were formally acknowledged and celebrated at last week’s Thames River Watch celebratory event, held at HMS President on the Thames near Tower Bridge. At the conference, volunteers got the chance to network and gain an exclusive look at the results as they were unveiled for the first time. 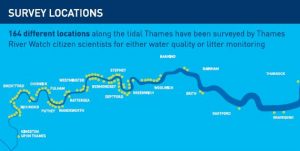 The next phase of Thames River Watch is expected to yield even more interesting findings, as the team uncover the sources of litter sources, the ways it gets into our waterways and the reasons why different types of litter peak and trough at particular times.