We’re carrying out detailed water quality testing of the Moselle River as part of the Love the Lea campaign. The river runs through Haringey and into the Lea. The tests are done at our lab in Bow. It’s at an early stage, but we have a good data set already.

The source is Queen’s Wood in Muswell Hill where different rivulets wind through the oak-hornbeam woodland. The Moselle here is in many places a natural river – walking through the trees next to the streams is lovely. The water quality matches this; apart from one location where a house might have connected its wastewater pipe to the stream (the water at this point is significantly warmer than the rest of the test sites, a tell-tale sign of a misconnection. Nitrate is also high here). 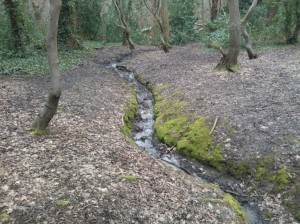 After Queen’s Wood the river sadly disappears underground into a culvert and doesn’t re-surface until Lordship Recreation Ground in Tottenham, by the Broadwater Farm Estate. Being hidden as it passes under Hornsey, Wood Green and Crouch End sees the Moselle get polluted in secret. The roads all drain to the river and countless homes are misconnected. So it’s no surprise that the river in the park stinks of washing machines, dishwashers, oils and is thick with sewage fungus. Phosphate levels are very high here (three and a half times the Very High rating of 1 mg per litre). Phosphate in different compilations is in detergents and cleaners. And human excrement. The e-coli levels here are high in the water too. A river in a public park not fit for humans or nature. 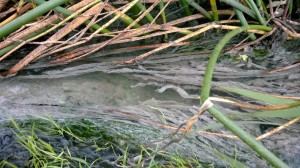 Then for the Moselle it’s back underground to suffer pollution from Bruce Grove and Tottenham Hale. It’s made to turn a couple of right angles before it spews into the River Lea at Markfield Park. It’s hard here to determine which river is the more polluted; something we are working on. The water quality tests do show that ammonia is high at this point (failing the Water Framework Directive). Ammonia is from sewage in this case so it could be from Deephams Sewage Works. Phosphate is very high as well (4 mg per litre). Copper levels are raised here but we need to do more testing to be sure what’s going on. 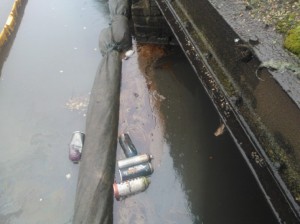 What I like about what we are doing is that our starting point is the question “Is this river healthy?” In the case of the Moselle, it looks sick, it smells putrid and there’s very little life in it. We then back it up with hard science. You can trust your nose, you can trust the science.

We now have two citizen science testing groups along the Moselle – the Friends of Queen’s Wood and the Friends of Lordship Rec. Sentinels in the struggle for healthy rivers and clean water.