The evening gave us the opportunity to celebrate the past year’s work with approximately 200 guests, and thank our many loyal Thames21 volunteers and partners. Display stands highlighted our varied projects and we shared our exciting plans for the next five years through our new ‘Championing the River’ document. 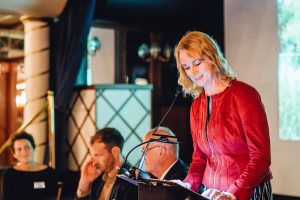 She said: ‘It’s called Championing the River – and that is exactly what we intend to do. We have the experience and the knowledge born of 20 years of engaging directly with these issues in neighbourhoods and in rivers. We have the team, we have the supporters, the time is right – we will not waste this opportunity for Thames21 to maximise the impact, and public benefit, of what we do.’

This year we also wanted to give our supporters, partners and volunteers the chance to hear from staff members working directly on the ground across London. 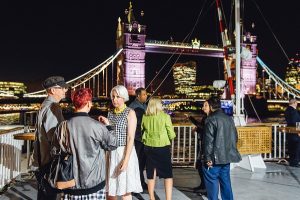 We decided to highlight our successful Love the Lea and Fixing Broken Rivers project in East London, and how the lessons there are shaping more recent exciting work going on in West London.

The audience heard an inspiring speech from Ben Fenton, the Project Manager for Fixing Broken Rivers, which tackles water pollution in the Lower Lea Catchment, as part of the wider Love the Lea campaign. He explained how HSBC support has funded a free catchment-wide education programme reconnecting school children to their local river.

It’s also enabled us to use innovative methods to raise awareness of the pollution problem, through the Love the Lea festival and Surface Tension project. 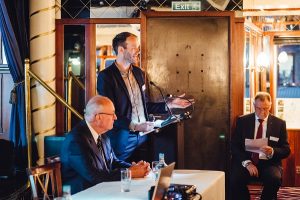 Ben talked about how we’ve worked with partners to help deliver rainscapes, planted systems which mimic nature, to limit pollution entering rivers, and gave an example of the Glenbrook wetlands in Enfield, which has dramatically reduced polluting nitrates and boosted invertebrate numbers.

‘Our rainscapes work is a wonderful testament of the Thames21 approach’ he said. ‘By listening to local people the project has come from grass roots, from citizens to charity, to public sector and now the private sector are becoming interested in being involved.’

The audience then heard from Edel Fingleton, the Education Co-ordinator for the Welsh Harp Environmental Education Centre, which the charity took over from Brent council in January. Its first full-time member of staff started work last week. 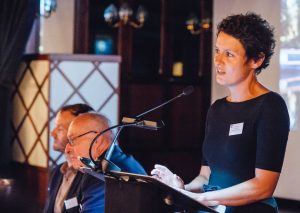 Edel said: ‘The centre is made up of 5.5 hectares of woodland, two ponds, the East Kingsbury Brook flows through it. We also have two classrooms and an office. It really provides us with valuable space that we never had on the West of the city and creates an amazing hub for all our developing work in the catchment.

‘Traditionally, this site was used for paid for schools education which we are continuing. Since we took over we’ve worked with many classes from 36 schools. The site is not just for schools, we want to develop it for a community space, too.’

Edel added that a ‘really significant’ area of her department’s work had been the charity’s involvement in the Brent Catchment Partnership.

She also spoke about how the charity is in the second year of a project to improve Stanmore Marsh and Queensbury Rec. 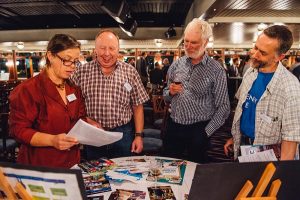 During the evening, the audience had the chance to talk to staff, view Thames21’s Foreshore Treasures (collection of items found on the foreshore over the years) and guess the number of mystery items in a jar (the answer was cotton buds, and the correct number was 1,251). 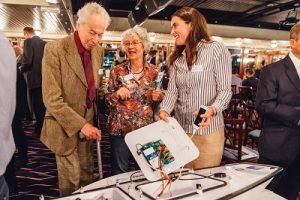 They also got a sneak preview of an INTCATCH boat. In partnership with Brunel University, this project is developing remote controlled boats to monitor water quality as part of a European-wide analysis in tributary rivers.