The Chelsea branch of FatFace, the clothing and gifts outlet, has chosen Thames21 as their “Thanks for Giving” charity for 2016 in the company’s alternative take on Black Friday discounting.

Instead of offering a discount on the global phenomenon, the clothing and accessories chain lets each of its 221 branches choose a charity to which a portion of profits will be donated in its “Thanks for Giving” scheme.

This will not just apply to sales of items on Friday, November 25th, 2016, but for the whole week – starting this Monday, 21st November, with 10 per cent of the company’s profits for that week going to the charities. 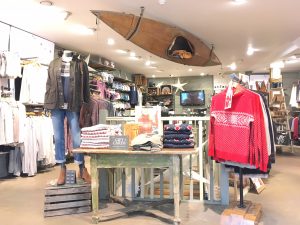 Thames21 was chosen by Harry Humphries, manager of the FatFace store on Kings Road, Chelsea.

He said: “We’ve got a kayak strapped to the ceiling of our shop, we’re not far from the river and we felt Thames21 was a great connection to make. We wanted to choose a charity with which our customers could really identify that we could really push to them.”

A kayak features on the ceiling of the Kings Road, Chelsea, branch of FatFace

When making purchases, customers will have the choice to nominate where their portion of the sale goes, either to Thames21 or to the FatFace Foundation, which will split funds raised across the company’s branches equally among all the charities chosen by individual stores.

Last year, FatFace decided on the Thanks for Giving campaign to make a statement against the discounting epidemic of Black Friday and raised £200,000 for charities. FatFace has already committed to giving more than £100,000 this year and aims to beat this year’s total by running the campaign from November 21st to November 28th, covering the Black Friday weekend. 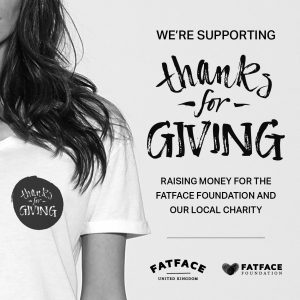 During the Thanks for Giving scheme period, the Kings Road store will have a display material and leaflets outlining the work of Thames21 and outlining how people can become involved as a volunteer.

Debbie Leach, chief executive of Thames21, said: “We are really pleased that Harry has chosen Thames21 because he feels that the river is a cause close to his customers’ hearts.

“We know from volunteering events we put on in nearby Hammersmith that there is huge interest in our work to improve the Thames. As well as foreshore clean ups, our links to the area are particularly strong because we have a community hub in Hammersmith, as part of our Thames River Watch programme which gives volunteers a real chance to play a committed part in monitoring the health of the river by becoming citizen scientists.

“We very much welcome the opportunity Harry has given us to highlight our work in his store during the period of the Thanks for Giving scheme.”

To make a donation to the FatFace Foundation, which will distribute donations to all the 221 charities nominated by branches, people can Text THKS16 followed by the amount they would like to donate in £’s to 70070. Online shoppers will be able to nominate a particular charity.

For more information about the FatFace Thanks for Giving promotion, visit their website.

Thames River Watch volunteers spend a couple of hours each month on the foreshore helping Thames21 build a better picture of the health of the tidal Thames. The free training includes learning about the history of the Thames, the tidal foreshore environment, how to undertake a litter survey and how to report your findings.