The chairman of Thames21, London’s leading waterways charity, is urging local residents in Staines to help improve the environment along their stretch of the Thames as he turns a clean up supported by a micro brewery into a family day out.

Michael Hamilton, Chairman of the charity, went along with his son-in-law Jeremy Warrillow and grandson Jamie, aged 8, when Thames21 carried out a clean up followed by a tour of the award-winning Thames Side Brewery, on Timsway, last October.

It was the first time that the charity’s Maidenhead to Teddington programme had forged a link with a business for a joint event. It was such a success that a second one is planned for Sunday February 26, from 10am to 1pm – and the three generations are planning to go along again. 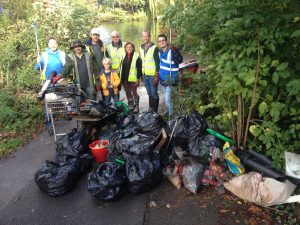 Mr Hamilton (in the centre of the picture,  left) said: “My son-in-law Jeremy is very interested in the river and he suggested we should go. He’s very keen to take his son Jamie out on the river, too. They go to church in Twickenham on Sundays right next to the river. When he was at the river the last time, he said there were an enormous number of eels, which just shows there is a huge amount of wildlife needing our help to protect it.

“The charity is doing important work and, as chairman, it is important for me to find out from the volunteers what they do and to share their experiences.

“Everyone is very responsible for the environment and our river and I was very really pleased to be there helping to restore it.”

Like last time, the event will comprise bankside enhancement as well as litter removal.

Mr Hamilton added: “There was quite a lot of junk – it wasn’t just litter that we tidied up. It looked like there had been some fly-tipping and there were things like bicycles, shopping trolleys and tyres.”

Mr Hamilton was among those who joined the beer tasking at the Thames Side Brewery, after the clean up.

He said: “One the strengths of Thames21 is the ability to get local people involved in helping the environment and to get the community involved. It’s not just a one off – these people have a lasting interest in the river and we’re grateful for the Thames Side Brewery’s support – a beer was certainly very welcome after our hard work, although Jeremy had to take Jamie home.”

Thames Side Brewery has a strong interest in the river, naming its craft beers after birds found along the Thames. Many of these are seen near the brewery whilst brewing is actually taking place. The micro brewery is not usually open to visitors, but anyone who takes part in the clean up will be rewarded with a tour and tastings of their award-winning beers Egyptian Goose IPA and Black Swan Porter, which recently took accolades from the Campaign for Real Ale.

Michele Gibson, head of sales and marketing at Thames Side Brewery, who runs the brewery with head brewer Andrew Hayward, said: “It felt really satisfying to help clear up this section of river – but we need a lot more people to come out and help.

“We all really enjoyed the experience. We had a great chat with Michael and he and everyone else really seemed to have a great time.”

The meeting place is just off River Park Avenue, near the Riverside Club, TW18 4SJ, and the brewery tour and tasting is just across the river opposite the Riverside Club (via Staines Bridge) at Unit 7, Tim’s Boatyard, Timsway, Staines upon Thames, TW18 3JY.

Places for the brewery tour, for over 18s only, are available to clean up participants but are limited and must be booked in advance.