Large mounds are changing the shape of the Thames foreshore. On April 1, the day before the Boat Race, the public will help measure how much of them is made of plastic

Date of release: 23 March 2017: The day before the Boat Race, Londoners are invited to investigate a growing plastic menace on the Thames. Thames21’s The Big Count, now in its third year, is an opportunity for the public to contribute to the ongoing Thames River Watch citizen science programme monitoring the health of the Thames. 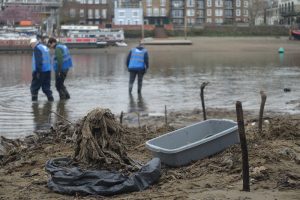 On one Thames foreshore, for one morning, the general public comes together to measure and monitor one aspect of river health. This time the setting is Hammersmith, south of Hammersmith Bridge, where mysterious new mounds can be seen at low tide. Although these mounds look like natural sandbanks, they are largely made up of wet wipes, which do not break down as they contain plastic. Mud and twigs build up round them to reshape the riverbed.

Nobody knows how much plastic is contained within those mounds, but the Big Count aims to change that – and it needs Londoners’ help on April 1, from 11am to 2pm.

AJ McConville, Thames River Watch programme coordinator, said: ”If you’re concerned about plastic finding its way into the river and into fish, this is a great way to do something about it. It’s also an opportunity to enjoy yourself in a beautiful spot away from the hustle and bustle. People love our Big Counts because they’re fun, and give Londoners a chance to come together as a community.”

Wet wipes are finding their way into the Thames in huge numbers,  to the extent that they are now altering the shape of the foreshore, with large mounds forming at several sites often on the inside of bends in the Thames, where the water moves more slowly.

The latest Thames River Watch findings, released in January, showed that wet wipes are one of the top 10 items found on the Thames foreshore. But they are hugely under-represented in the data because those sites are difficult to access and because they become tangled together.

The highest concentration recorded to date was on the south side of Hammersmith Bridge where 150 wet wipes were found in 1m2, counting those found on the surface only.  Thames River Watch joint coordinator Nick Beevers said: “We know this issue of hidden plastic in the river is a huge concern for people. We’d love as many Londoners as possible to come and help us find out the extent of the problem, as a first step to do something about it.”

Hammersmith is also the location of one of several Thames River Watch hub sites across London, which also include Battersea, City of London and Greenwich and Isle of Dogs. At each site, there’s a thriving local group which goes out regularly to monitor Thames health on various sites on the foreshore. Those interested in joining can contact thamesriverwatch@thames21.org.uk and sign up for the latest free training via the website.

The Thames River Watch project is funded by Tideway, the company building the Thames Tideway Tunnel. Andrew Triggs Hodge, the recently-retired Olympic rower, who now works for Tideway, said: “Throughout my rowing career, I regularly saw at first hand the discharges of sewage into the river from London’s overburdened, Victorian sewers.

“Wet wipes and the rest of what is flushed down London’s toilets have no place in the city’s biggest natural asset. That’s why I am so excited to be part of the team now delivering the Thames Tideway Tunnel, which will capture these all too frequent, unacceptable discharges, including from overflow points within yards of the Boat Race course at Putney and Hammersmith.

“With our construction work now ramping up every day, the good news is that the tunnel within a matter of years will transform the quality of the river for this and many generations to come.

“We are also intensely proud to be supporting Thames21’s River Watch campaign, which is doing so much to raise awareness of the health of the Thames  and reconnect Londoners with the waterway that has been so central to the city’s development.”

Since its launch in 2014, Thames River Watch has conducted 56 litter surveys across 15 sites on the Thames, through its network of trained citizen scientists. Its report earlier this year threw up new insights about the health of the river, and the growing impact of plastic on London’s iconic waterway.