Guided tours of Headstone Manor Park’s new wetlands will be among activities at a free community celebration on Saturday 11th September, involving Thames21.

Storytelling, willow weaving, water monitoring, sport and photography workshops will also feature at the event, from 10.30am to 3pm. The celebration marks the completion of a £2.165m Lottery-funded habitat restoration project in the parklands surrounding the 14th Century manor house. The transformation has been led by Harrow Borough Council, alongside community work by Thames21 to engage and educate the community about wildlife, pollution and flooding issues. 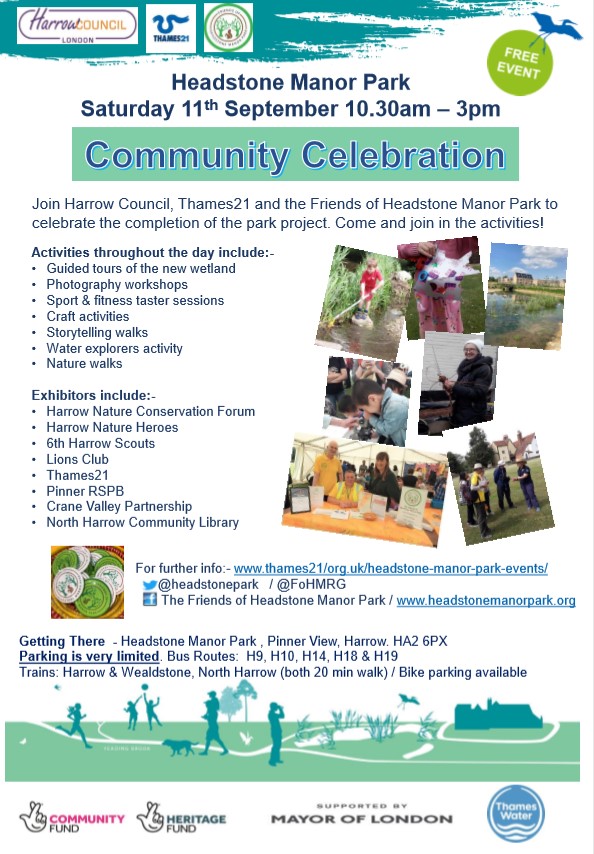 Visitors will also be able to access two new nature trails where they can learn about wildlife, such as herons, badgers and birds, as well as the issues that affect them, including pollution and flooding.

Thames21 has produced two leaflets to help visitors explore the Park. A Wayfinder Trails pamphlet is a guide to all the site’s nature walks. Following footpaths around the Park, it highlights a newly planted orchard, meadows and woodlands, as well as new picnic areas. And a Wild Fun activity sheet inspires families to play and explore in the park.

The latest phase of the Park’s restoration was begun in 2019, concentrating on the parklands surrounding Headstone Manor and Museum.

The Park will not only be a haven for nature – badgers and bats might be seen at dawn or dusk – it has also been designed to address river pollution and cut the risk of flooding for local communities. Flood storage basins were excavated in 2020, to hold water for short periods during high rainfall. This prevents flooding downstream. The temporary ponds this creates attract wildlife like toads, while plants such as lady’s smock thrive in the wet soils.

As part of the pollution control measures, a wetland habitat comprising ponds and a reed bed have been created. These areas are already attracting dragonflies and much other wildlife. And, after years of running underground, the Yeading Brook has been opened up for the benefit of wildlife and for people to enjoy. Here, volunteers test the water for hidden pollution. The presence of freshwater shrimps indicate cleaner water.

The project was funded by the National Lottery Heritage Fund under the Parks for People Programme and the Greater London Authority. The work, hosted by Harrow Borough Council, also received funding from Thames Water, Harrow Parks, Green Grid and contributions from developers.  The celebration event also marks the completion of the £1m Flood Alleviation Scheme funded by Thames Water, the Environment Agency and the Thames RFCC (Regional Flood and Coastal Committee).

During the past two and a half years, Vicky Duxbury, Thames21’s Outdoor Learning Officer for the project, has engaged the community in North Harrow by organising a multitude of activities. These include nature walks, art classes, fitness and well-being activities plus volunteer litter picking and waterway management events. She has worked closely with Harrow Borough Council, the Friends of Headstone Manor Park, the Harrow Nature Conservation Forum and the Museum.

The purpose has been to develop residents’ understanding of their local waterway, its wildlife and its role in the wider network of waterways. For example, the Wayfinder Trails leaflet emphasises research that shows that 80% of ocean plastic comes from rivers. It also details how water from the Yeading Brook enters the sea via the River Crane and River Thames.

Her events have also educated communities about people’s impact on nature. Sessions have explored personal water usage and how dog flea treatment can end up in waterways – as can silt, oil and toxic metals washed off roofs and roads. One of the new sedimentation ponds traps some of this silt from a new housing estate that was built on the site of a former Kodak factory.

Other activities organised include Qigong, which is linked to yoga, for mental health and fitness, and nature exploring Find out Thursdays. Vicky said: “The Lottery funding has allowed us to put on a whole range of fantastic activities which inspire people to learn about their blue/green spaces, helping them to appreciate nature and raising awareness of water issues.

“People of all ages have really enjoyed planting reed beds, carrying out water monitoring and learning from experts about spiders and birds and learning how to record what they see using art or photography so that sightings can be added to national databases such as iNaturalist and iRecord.

“Our engagement work has been designed to make people really think about how their lifestyles can be more water and climate friendly and how their actions link to climate change issues such as erratic weather patterns and increased flooding.”

Vicky is now putting together an education pack and programme plus trialling sessions with local schools as Thames21’s engagement events continue until December. Keep an eye on the Headstone Manor Events Page for full details.

The community event on Saturday 11th September will be preceded by a celebration launch on Friday 10th September. This is an invitation only event for guests, such as representatives of the funders and the Mayor of Harrow and the Leader of the Council.