River charity Thames21 has today released data showing a mound created by wet wipes, which has grown to the size of two tennis courts and over a metre tall in the past six years.

High-resolution sonar and laser scans of the riverbed of the Thames in west London have been collected along the River Thames in Hammersmith as part of work to build London’s new super sewer, which will tackle 95% of sewage overflows that currently pollute the river.

Although the super sewer will help reduce sewage litter into the river, environmental campaigners are today reminding people of the damage wet wipes can do and the importance of keeping them out of the sewage network.

With all-party support, a Ten-Minute Rule Bill, proposed by Fleur Anderson MP (Labour Putney), which would outlaw the use of plastic in wet wipes, is due to have its second reading on 26 November. Fleur Anderson said: “We use 11 billion wet wipes every year in the UK and 90% of them contain plastic. Flushing the odd wet wipe may not seem like a big deal, but there are 300,000 blockages every year in our sewers. Since my ‘Ban plastic in Wet Wipes’ Ten-Minute Rule Bill had its first reading on Tuesday 2 November, I have been blown away by the amount of coverage and cross-party support the campaign has received.”

Debbie Leach, CEO of Thames21, said: “This data is a stark reminder of the damage wet wipes cause to our natural ecosystems. We are fully supportive of removing plastic from wet wipes and look forward to the day when the river is free from this pollution.”

When wet wipes, currently usually made of plastic, get into the Thames, they bind with natural sediment to create large mounds. Literally changing the contours of the river, this pollution poses a growing threat to the river’s flourishing wildlife. 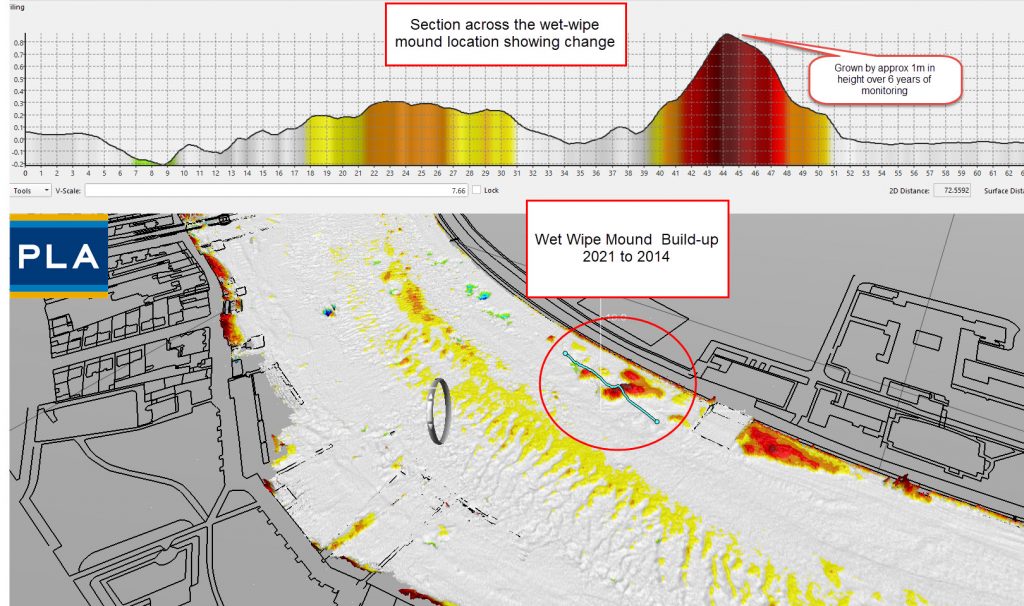 Tideway regularly carries out surveys of the riverbed and foreshore as part of its work to build London’s new super sewer, due to be completed in 2025.

John Sage, head of corporate responsibility at Tideway, said: “Once complete, the super sewer will capture more than 95% of sewage overflows into the River Thames. While this will help tackle some of the sewage-related litter that ends up in the river, we all have a duty to ensure we are disposing of our rubbish correctly.”

Robin Mortimer, chief executive of the Port of London Authority, said: “Tackling the needless pollution of the river must be a priority for everyone that cares about its future. The Thames Tideway Tunnel will be a major boost to the health of the capital’s waterway, but everyone can play their part right now, by avoiding plastic wet wipes and ensuring that they flush only the three ps – pee, poo and paper.”

Anna Boyles, Thames Water’s operations manager, said: “We know many busy families love the convenience of wet wipes, but most are made from plastic and can take centuries to biodegrade. It’s like flushing a plastic bag down the loo.

“Some wipes are marketed as ‘flushable’. All that means is that they will disappear down the u-bend, but they’re not gone for good and could end up clogging your pipes or in the river. We’re working to influence manufacturers to properly label their products and, even better, to remove the plastic from the wipes altogether. If you’re using standard wet wipes, please pop them in the bin instead of the toilet.

“We’re also working with the government, Ofwat and the Environment Agency to accelerate work to stop these unacceptable discharges of untreated sewage and sewage litter from happening in the first place.”