As 2021 enters its final stages, the year will invariably be reflected upon as one marred by the continuing pandemic, but it may also be considered a year of partnership, collaboration and innovation which has delivered remarkable results in challenging times and brought local communities together – especially here at Thames21.

Our environmental charity has striven to protect and transform the River Thames and its tributaries since 1994. We are not stopping in that task. Here, we would like to use the year’s end to reflect on some of the innovative, ground-breaking and ongoing projects our teams have delivered this year.

Thames River Watch was launched in 2013 by Thames21 and Tideway, the company building London’s new ‘super sewer, to encourage communities to improve understanding of the environmental issues facing the tidal Thames and to raise Londoners’ awareness of how to access, understand, enjoy and benefit from all that the river has to offer. In late October, we announced a new partnership with Tideway and Thames Water to start a new three-year phase of the programme.

The next phase of the programme, called ‘Thames River Watch for All’, will involve broadening out the initiative’s volunteer base and building up its engagement with riverside communities. This will include a focus on recruiting volunteers from more diverse backgrounds and groups who are poorly represented in the environment sector, including ethnic minority communities and people on lower incomes.

Thames21 always has volunteers at its heart. To date, the Thames River Watch programme has trained more than 600 citizen scientists, seen more than 3,500 Londoners take to the Thames foreshore in activities which promote learning, action and enjoyment, and set up a network of seven volunteer-run ‘river action groups’ from Barnes in West London to Canvey Island, Essex in the Thames estuary.

The programme has illustrated the impact of plastic pollution on the tidal Thames by establishing a volunteer-led monitoring programme that identified, for the first time, the most common plastic items (i.e. wet wipes, food wrappers, cotton buds, and drink bottles) in the river. In total, volunteers have collected more than 100,000 plastic bottles, half of them water bottles, and more than 500,000 wet wipes.

In November, Thames21 also provided crucial research to Putney MP Fleur Anderson’s Bill to ban plastic in wet wipes, which in turn has contributed to a government consultation on the matter.

Commenting on the Thames River Watch programme, A.J McConville, Thames Programmes Manager, said: “Thames River Watch is pioneering ways to give Londoners greater ownership and role in the protection of the river. Starting with citizen-science approaches to collecting data on the plastic pollution on the river, the data provided by volunteers has contributed to new proposed changes in legislation. Our current project is working alongside local community leaders to co-develop ways that access to the river can benefit the communities that live beside it.”

Read more about the project: https://www.thames21.org.uk/thames-river-watch/

The Thames Connections Project was launched in early November 2020 and aims to inspire underrepresented and low-income communities from six London boroughs to engage with their local rivers.

These boroughs include Tower Hamlets, Newham, Barking and Dagenham, Wandsworth, Southwark, and Greenwich.

We work together with community organisations, local authority experts, the arts world, the educational sector and businesses, among others, to help shape the Thames Connection project.

So far, the initiative has made significant steps in achieving its long-term goals of promoting and delivering a programme of river-based activities for local communities.  For instance, over the summer and autumn period this year, local communities have enjoyed participating in foreshore clean-ups, art workshops, and a river ritual celebrating the West African water deity (Mama Osun) during London Rivers Week/Black History Month. More than 100 people participated in these events.

Earlier in the year, we also led and organised a series of webinars that focused on exploring the significance of rivers in different cultures. The series was attended by more than 100 people.

Overall, this programme of vibrant events was co-produced with key partners to capture the interest of the targeted communities. Long-term, it is hoped that these partnerships will leave a lasting legacy to help empower underrepresented communities to protect their local rivers, enjoy them and make Thames21 activities more inclusive.

Elsewhere, Thames Connections is also wrapping up a one year research programme to identify existing barriers that prevent people using the river and/or volunteering in Thames21 activities. The research also explored the cultural significance of rivers to the neighbouring Thames communities.

Dilawar Hussain, Tree Planting Engagement and Inclusion Officer, said: “Thames Connections has been an innovative project by exploring how different cultures value rivers. By exploring and sharing these values and traditional practices, the project has co-created activities which align with cultural connections whilst finding ways of improving the local environment. This approach reaches out to London’s diverse communities as well as making Thames21’s activities more inclusive.”

Read more about the project: https://www.thames21.org.uk/connecting-communities/thames-connections/ 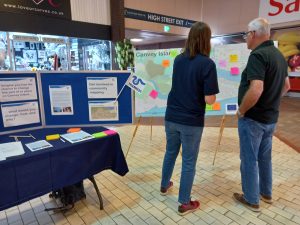 Taking urgent action to combat climate change and its impacts will be critical if we are to reimagine a healthier and sustainable future for all people. Research suggests that climate change will bring more severe weather catastrophes such as flooding and so governments will need to investigate ways to make communities and places more resilient to flooding[1]. Flooding resilience programmes for local communities will have an important role to play in this task.

Thames21 is empowering communities in Canvey Island, Essex, to co-create solutions to flooding with public authorities as part of an exciting two-year pilot project funded by the European Union. Building Resilience in Communities (BRIC) is a €3.4 million initiative led by Plymouth City Council.

The scheme brings together communities, local authorities, organisations and businesses to make an impact at a landscape scale for the area’s natural environment and heritage. Canvey Island’s BRIC initiative is one of eight pilots running across the UK and France, funded by the EU’s Interreg France Channel England Fund.

Set on the South East coast of Essex in the Thames estuary, Canvey Island was the fastest growing seaside resort in the UK in the first half of the 20th Century. But it was devastated by floods in 1953.

Now largely protected from tidal surges by its sea wall, the area has suffered from extensive surface water flooding a number of times in recent years, as a result of heavy rainfall and poor drainage. With extreme weather events linked to climate change and major flooding incidents such as in 2014, 2016 and 2018 likely to be repeated if the situation is not addressed, the project will focus on future proofing the area.

This year, Thames21 held a series of community events to give Canvey residents and community groups to have an input into building resilience against the island’s flooding issues.

Jessica van Grootveld, BRIC Canvey Island Development Manager, said: “I’m excited to see the transnational cooperative BRIC project unfold. Building flood resilience in communities is a social innovation project, rather than a conventional climate change adaptation project.  It was one of the more challenging project bids I’ve co-developed and it requires us to think outside of the box.”

Kate Monson, BRIC engagement officer, said: “Taking a rich, reflexive, locally-led approach, community mapping is at the core of our practice, listening to the stories of people on the streets and linking these with conversations going on at policy level. Another strand is our experimental engagement approach, focused on shifting perspectives and disrupting expectations, with the aim of enhancing ‘hydrocitizenship’, a watery sense of place and a water risk aware mindset.”

Read more about the project: https://www.thames21.org.uk/connecting-communities/building-resilience-in-flood-disadvantaged-communities-bric/

The Silk Stream Flood Resilience Innovation (SSFRI) is another project, which was launched earlier this year, aimed at reducing the risk of flooding in local communities, specifically the Silk Stream catchment and wider River Brent in North-West London.

Working in partnership with Harrow Council and Barnet Council, amongst others, Thames 21 will work with local people on solutions to tackle flood risk, improve urban habitats and create nature-based innovations.

One innovation will be to work with Thames Water to install thermal monitors to detect misconnected sewers along Silk Stream, which flows through North-West London to join the River Brent.

The nature-based solutions are likely to include tree planting, a new wetland and landscaping to manage and hold water during storms.

To date, public engagement has already been successful with a series of flood-themed pub quizzes held in order to drum up local interest and to bring together people who will later help to design the final flood scheme and landscaping.

“At the heart of this initiative is a concept called co-design, collaborating with residents, flood modellers, and various stakeholders to explore all opportunities. We aim to build new wetlands, restore stretches of river and create new areas of natural drainage to increase flood resilience as well as create a host of other benefits, including improved water quality, beautiful public spaces that will boost health and well-being and much needed habitat for wildlife.”

Read more about the project: https://www.thames21.org.uk/connecting-communities/silk-stream-flood-resilience-and-innovation-project/

Through the Oxford Rivers Project, Thames21 has been able to highlight key research themes, work with local citizen scientists and provide crucial evidence on the issues of river pollution.

The project is a partnership between the #endsewagepollution mid-Thames campaign group, Oxford City Council, the Rivers Trust, Thames Water, and Thames21.

Earlier this year, we led research on the project to show that raw sewage spilling into the Thames after rainfall was making popular swimming spots in Oxford unsafe.

Volunteers collected water samples over 18 days this year at three places: Port Meadow, Longbridges and Kennington Meadows. The samples were then tested in Thames Water’s labs and were found to contain bacteria levels on average twice the recommended safety threshold during May and June, including on days when more than 70 adults and children were swimming.

The study is an important step to identifying where the major sources of river pollution are coming from, and where Thames Water needs to upgrade its sewage treatment systems in order to improve the river water quality in this area.

It is hoped that Port Meadow will be given bathing water status in the New Year, so that the site can receive greater funding, testing and improvements.

Read more about the project: https://www.thames21.org.uk/improving-rivers/oxford-rivers-project/

These are just some examples of the innovative work we are doing at Thames21 to end 2021 with. Sometimes it’s good to take a moment to focus on what is going right in the world… and know that we can work towards more larger-scale transformative adaptation and work towards inspiring our communities to enjoy and protect their rivers. Bring on 2022!