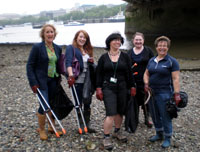 Despite the distinctly un-summer-like weather, nearly 100 volunteers gathered on the Thames foreshore for our first June event, to help prepare the Thames for the Queen’s Diamond Jubilee River Pageant. Dressed in wellys and gloves; and armed with litter picks and sacks, spirits were high among volunteers as they tackled the wide foreshore between Shakespeare’s Globe and Gabriel’s Wharf.

It wasn’t all work and no play for our volunteers though, along the foreshore volunteers and passers-by were invited to take part in guided walks with the Thames Discovery Programme, take part in river dipping with the Zoological Society of London and enjoy exciting Thames stories told by story teller Rich Sylvester.

Archaeologists were on hand to identify any interesting finds, including a 17th Century pipe and a 1960’s Pepsi bottle.

Regular Thames21 volunteers were joined by those newer, those less familiar with the foreshore, families enjoying an afternoon on the river, and tourists seeking an alternative view of the city.

Around 70 bags of rubbish and lots of loose debris was collected at the event, including bags full of cable ties, glass bottles, plastic  and metal debris and a bicycle.

Gabriel’s Wharf has now been identified as a hotspot for cable ties, can anybody tell us why? Let us know in the comments box below or email info@thames21.org.uk.

This event was sponsored by Old Mutual Plc.

The Litter Free Jubilee is part of the Big Waterways Clean Up 2012, a London 2012 -inspired, partnership campaign to improve East London’s waterways by July 2012.

The Diamond Jubilee River Pageant took place on Sunday 3rd June and was attended by an estimated 1.2 million people.