London, UK – 15 June 2016: Have you ever wondered where your local river is? What secret wildlife lives in and beside it? What difficulties it faces and how you can help to improve it? These questions and many more like them will be answered by the launch of a brand new annual public event: London Rivers Week. 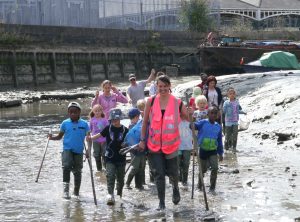 Debbie Leach, Chief Executive of Thames21, the waterways charity putting healthy rivers back at the heart of community life, said: “London Rivers Week is all about bringing people and nature closer together. We want to inspire people to connect with their local London river by attending one or more of the many events that environmental organisations have planned across the capital, which will showcase what makes each waterway special, the challenges they face and new ways to connect with them. We hope this will motivate more Londoners to help make the future of our rivers a healthy one.

“It is no secret that our waterways suffer from flooding, water quality issues and uncelebrated habitats, yet many are unaware that the river restoration work happening around the capital is a key part of the solution.”

London’s rivers have benefited from 17.5km of restoration since 2008, exceeding the targets laid out by the London Plan. The restoration was delivered through urban regeneration projects, catchment partnerships and Environment Agency flood risk schemes.

The rewilding efforts benefit environment and communities, through projects such as Ladywell Fields in Lewisham which gave the River Ravensbourne a new floodplain and local people a more attractive park; and Butter Hill in Carshalton which removed barriers for migrating fish on the River Wandle and created new wetland areas around the river for people to enjoy.

The Mayor of London, Sadiq Khan said: “London’s rivers enhance our city by providing precious natural spaces to enjoy and for wildlife to thrive. It is vital we all work to protect and appreciate these wonderful waterways. London Rivers Week provides an opportunity for Londoners, local authorities and developers to find out how they can play their part.”

London Rivers Week is giving Londoners the chance to see rivers which have been re-landscaped and replanted to make them more attractive to wildlife and people. These projects help improve not only the health of the rivers, but that of people living near them and using them for recreation.

Debbie Leach added: “City dwellers rarely get the chance to celebrate and learn about rivers in an urban setting, so we are incredibly excited about offering these free guided walks and other events during London Rivers Week. They will help many more Londoners connect to their nearest river.”

London’s rivers are often peaceful, natural places where we can escape city life, but many are hidden behind buildings and fences, making them hard to get to. New river projects across the city have removed some of these barriers, increased the amount and variety of plants on the river banks and created new community spaces.

London Rivers Week is led by the London Rivers Restoration Group: a partnership of environmental organisations working to enhance the city’s rivers and improve public access.

To find an event near you, visit www.thames21.org.uk/LondonRiversWeek2016