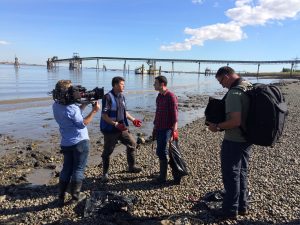 Viewers of BBC Countryfile on Sunday night were treated to tales of fascinating finds from Thames21’s Chris Coode.

One of the show’s presenters, Matt Baker, caught up with Chris at a foreshore clean up and spoke to him for a themed edition all about how waterways and rivers have shaped Britain’s countryside.

The Countryfile presenter joined a clean up at Denton Wharf, near Gravesend, which was arranged jointly between the Port of London Authority, Thames21 and the Port Health Authority, to mark the end of the first year of the Cleaner Thames campaign.

He asked Chris, Thames21’s deputy chief executive, to outline the more unusual items he had discovered during such events over the years. 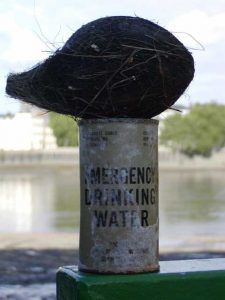 Describing another occasion, he added: “We found a Saxon spearhead once. It was just lying on the foreshore. It was sent away and preserved and is now sitting in our office – it has beautiful leaf-shaped blades.” 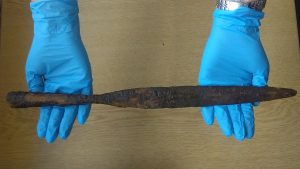 Chris also explained how the River Thames presents items to the surface.

“The tide is always bringing in more rubbish,” he said, “but it’s always moving the shore around as well – turning the shore over – and that reveals the old stuff. The new stuff is brought by the tide, or people depositing it.”

The event marked the end of the  first year of the Cleaner Thames campaign, which is designed to stop the tide of rubbish that is ending up in the Thames.

The campaign has been run jointly between Thames21, The Port of London Authority and * Tideway. 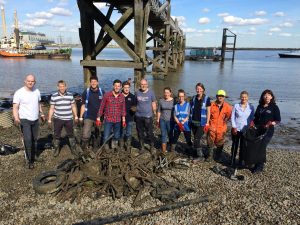 Hundreds of tonnes of rubbish are pulled out of the Thames each year, by volunteers including those working through Thames21 events.

Why not keep an eye on our events and take the opportunity to join in, whether it is taking part in a clean up of the foreshore at various locations, or removing vegetation such as non-native invasive species from tributary rivers?