More than 50 local volunteers helped smash the target to plant 10,000 bulbs at Stanmore Marsh, Harrow, on Saturday 26th November to create a vision of colour for next spring. 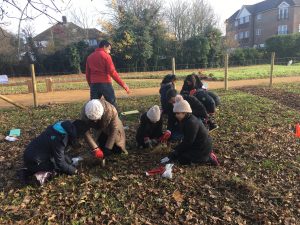 The final flourish of a challenge to install 10,000 bluebells, snowdrops and wood anemones involved planting the final 5,000 bulbs donated by Harrow Council – plus 1,000 crocuses from local Rotary groups.

With local Rotary groups donating 1,000 crocuses to plant on the day, a total of 11,000 bulbs were put in overall.

The Rotary donated the bulbs to highlight the Rotary’s national ‘Purple 4 Polio Campaign to End Polio Now’, and their members from Edgware, Stanmore and Harrow were among those who turned out to help.  Over the previous six weeks, groups planting bulbs had ranged from the 1st Stanmore Scouts, classes from Whitchurch & Aylward Primary Schools and many members of the public.

Vicky D’souza, Thames21 project officer for Stanmore Marsh, said: “It was really great to see so many people turn out to help us finish this project – and with the help of the Rotary we smashed our initial target. The area really will look fabulous next spring.”

The planting challenge attracted the attention of Peter Bradley, Rotary in London’s Environmental Officer, who asked to add 1,000 bulbs for the organisation’s campaign on behalf of the Rotary clubs of Edgware & Stanmore and Harrow.

He said: “We were delighted to work together with Thames21 to make our local environment better.

“It was delightful not only to be involved with the local community but the children who took part. If you haven’t visited Stanmore Marshes, you must – Thames21 and their partners have transformed a really scruffy bit of marsh land into a wonderful amenity for the whole community.

“In the past, you would just travel through the scrub to catch a bus.  Now you can enjoy the wonders of nature.

“One of the benefits of taking part in the planting is that you, in a small way, feel part of the project.

“We are all greatly looking forward to the spring when Stanmore Marsh will be a riot of colour. We would like to say a big ‘Thank You’ to Vicky D’souza and the team from Thames21 for making it a very special event.” 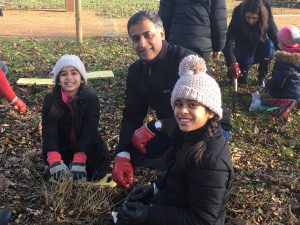 One of the children who took part with her family, Diya Thobhani, aged nine, said: “I loved helping out and had so much fun. It felt really nice to do something for the local community. I hope people will enjoy our flowers.”

The Thobhani family, Isha, 5, Mitul and Diya, 9, took part in the event

Cllr Graham Henson, Harrow Council portfolio holder for environment, said: “Well done and thank you to everyone who helped smash the 10,000 bulb planting target. Stanmore Marsh is fast becoming the ‘go to’ place for local residents and park users, and when spring comes next year, there will now be another reason to visit and enjoy the new refurbished open space. By working together with us, you are not just helping to transform disused open space, but you are also playing a big role in helping to build a better Harrow.”

The ongoing work to restore Stanmore Marsh is part of the Harrow Thames21 Partnership between the charity, Harrow Council, Thames Water Community Investment Fund and the Greater London Authority. Marshland restoration is due for completion in July 2017.

Further details about the project can be found on Thames21’s website http://www.thames21.org.uk/harrow-thames21-partnership/

Rotary has a long and successful history in its fight against polio, which started in 1985. Rotary continues to play a key role in raising funds.  Through its advocacy the number of countries where there were sufferers have reduced from 125 to two.