A volunteer has written to Thurrock Council to urge them to “take a lead” in the fight to keep litter out of the river and to put part of their parks and countryside budget into “pro-actively managing the riverside”. 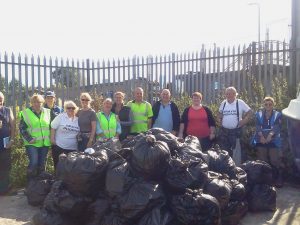 Clive Webster, a volunteer with Thames21 and other organisations bidding to clean up the Thames, wrote to several Thurrock councillors, seeking a “change of attitudes” to tackling litter in the River Thames, after taken part in seven clean ups in Tilbury and Grays between October 2015 and 2016.

Volunteers at the September clean up

His email, which can be read here in full and which he stresses is a personal view and not that of Thames21, details how these clean ups resulted in 453 sacks of rubbish being collected, by a total of 147 volunteers, he concluded that “litter is piling up as fast as it can be removed”. *

Mr Webster urges the council to take action because it is “worth noting that Grays and Tilbury would not exist today were it not for the Thames”.

He wrote: “[It] means that once a clean-up has been completed, people continue to litter the area. Admittedly, it remains clean for a few weeks but after that it reverts back to its dirty old self. (E.g. Grays beach yielded 74 black sacks in February and 72 in September). Naturally, this has a demotivating effect on volunteers and organisations alike.”

He continued: “Many of the areas we visited looked like they hadn’t been cleaned for years. In places, shoreline vegetation… had grown over the litter, making detection and removal more problematic. The litter was often dirty, smelly, toxic, ugly to look at, illegal and a health hazard.

“Left unattended, it could have been even more harmful because, recent surveys suggest, it can work its way insidiously into our food chain.”

Indicating that the problem appears to be getting worse, he pointed to the Marine Conservation Society’s annual Great British Beach Clean recently breaking records for litter collected, but he urged the council not to sit back and just think this was a national problem.

In the short-term, he said, litter collections will continue through volunteers, led by charities such as Thames21, plus the council’s refuse team – or Port of London Authority – disposing of the results.

But he asks: “Is there a better way?”

“Is it too glib to suggest that Thurrock Council could redirect some of its parks and countryside divisional resources elsewhere, so that the beach cleans become part of the normal service along with grass cutting and tree lopping?” said Mr Webster, pointing out that in his original home town of Southend, litter-strewn beaches after a summer’s day were cleaned up by the next day.

A warden for the River Thames Society, Mr Webster suggests a range of measures to prevent littering, including signage, £75 on-the-spot fines, litter bins and CCTV.

Mr Webster added: “The Clean it, Cut it, Fill it pilot scheme deserves encouragement but needs to include the riverside.”

He also urged Thurrock to treat the foreshore and river litter problem in the same way as parks and reserves and to establish a budget for the Thurrock Riverside with a senior councillor appointed to manage the fund. 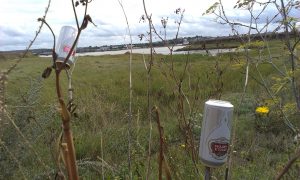 nclusion, he says that “a change of attitudes” is needed “attaching more importance to the health of rivers and treating it for what it is – a fragile and yet invaluable asset enhancing the lives of many. “It’s also worth noting that Tilbury and Grays would not exist today were it not for the Thames. For this reason alone, surely the world’s most iconic river deserves better?”

Beer trees: A scene at Tilbury before a clean up

He said: “I agree with everything you said. I am the vice chair on the Cleaner, Greener and Safer Overview and Scrutiny Committee. I, too, have helped on some of the litter picks and enjoyed meeting the people involved. I have joined in with the litter picks organised by my local forum in Chadwell St Mary.

“There are great plans ahead to tackle litter and fly tipping and other nuisance in Thurrock and the Borough is totally committed to achieving a vast improvement on how it appears today. I will forward your communique to those involved in this change so that the river frontage can be included in our Hotspot approach to tacking the problem.”

Mr Webster was also invited to give a brief speech at a subsequent Overview and Scrutiny Committee meeting on what has been achieved so far by himself, Thames21 and the volunteers.

He added: “Together we can achieve what we all want – Thurrock to be a much nicer place to live, work and visit.”

As a result of this letter, Clive Webster subsequently attended the Overview and Scrutiny Committee meeting in early December and made a presentation. He was joined by Thames21’s Development Manager Emma Harrington. A recording of this meeting is on Thurrock Council’s website.

* The eighth and final clear up of 2016 brought the total statistics since October 2015 to 515 bags of rubbish, collected by 158 volunteers.