Volunteers cleared litter from Millwall Draw Dock on the Isle of Dogs on World Rivers Day on Sunday to launch the Great River Rescue campaign.

Now the campaign needs you – the public – to add to the 20-strong list of events taking place in October in England, in the first national campaign of river clean-ups by multiple organisations.

The Great River Rescue is run by Thames21, the Angling Trust, The Canal and River Trust, the Rivers Trust and the Marine Conservation Society and has the backing of Keep Britain Tidy. 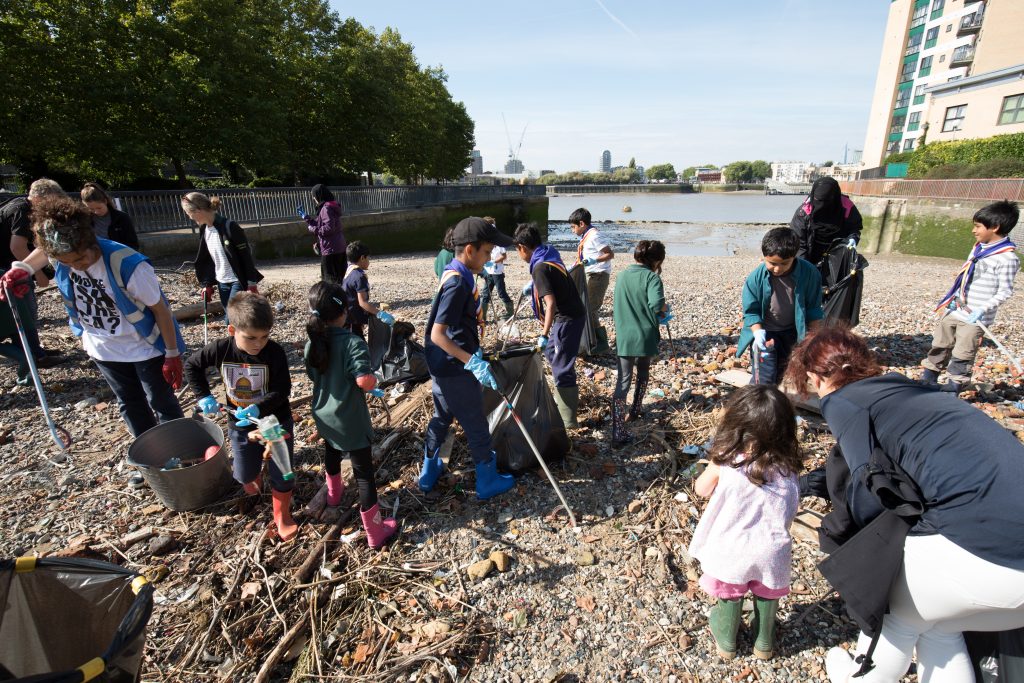 The campaign calls on individuals and community groups to put on river clean ups, to rid these important spaces of the rubbish which is blighting them as amenity spaces for people and places where wildlife can flourish.

At the launch on the River Thames, about 50 people, including a large group from the 16th East London and 2nd East London Cub Scouts and Emma Howard Boyd, the Chair of the Environment Agency, cleared litter including plastic bottles, cotton bud sticks and food wrappers from the site.

Much of the rubbish found in rivers is plastic. The campaign was inspired by Future Dust, the giant artwork made of plastic by artist Maria Arceo, who attended the event as an Event Support Team member having taken Thames21’s Leading a Waterway Clean up course in order to help her collect plastic for her project across 40 foreshore beaches across the River Thames. Her artwork is on display until this weekend a 10 minute walk along the tow path from Sunday’s launch site – at Canary Wharf.

For the campaign, each organisation is either putting on clean ups or pointing people towards activities and campaigns run by their organisations, nationwide.

Events registered already range from Truro in Cornwall to Rotherham in Yorkshire, with others in Grimsby and Leicestershire and several across London, including by Thames21’s Badged Groups whose leaders have passed the charity’s accredited Leading a Waterway Clean up course.

Thames21 has produced a “How to Lead a Clean up” guide for anyone wanting to put on a clean up.

The launch was reported live by Sky News as part of the corporation’s #OceanRescue campaign and on the evening news for London Live.