American actor and singer Zac Efron highlights the huge issue of London’s plastic waste problem as part of a new series on Netflix airing in the UK from 10 July.

Efron visited a key plastic waste hotspot at the scenic Concrete Barges, Rainham, an area of Essex saltmarsh where tonnes of lightweight plastic waste from the capital accumulates, forming huge plastic carpets. Thousands of single-use bottles, cotton buds and food containers wash up on the strandline at high tide, and local Thames21 volunteers do their best to monitor the plastic and remove it. 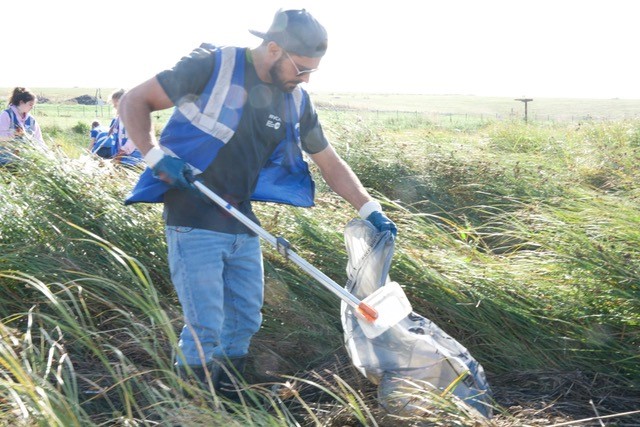 The Netflix episode airing this Friday July 10 shows Efron joining forces with leading environment charity Thames21 and a local Thames21 volunteer River Action Group, donning a high visibility vest, getting stuck-in with a plastic clean-up and commenting on the scale of the problem.

The devastating impact plastic has on key nature sites to the east of London is one of the key findings emerging from Thames21’s new Thames Plastic Pollution report. Much of London’s plastic waste ends up in the Thames, is carried downstream and then washes up on strandlines at high tide. Key saltmarsh areas accumulate the plastic due to their location and ecology, with reedbeds helping to trap the waste.

The London episode will be available from this Friday July 10 as part of Efron’s new Down to Earth series examining key sustainability issues like water, food and energy.

‘These areas are key green spaces for Londoners and important nursery grounds for fish and birds,’ said Chris Coode, Thames21 deputy CEO. ‘There is now so much plastic in these saltmarsh habitats that you can hear the plastic crunch underfoot as you walk along.’

More than 200 tonnes of waste is removed from the Thames annually by Thames21 and the Port of London Authority, but there is no statutory monitoring of plastic impact on the river. Thames21 set up a citizen science programme, Thames River Watch, to fill this gap, and this crucial plastic data forms the basis of the report.

Microplastic and polystyrene are widespread on the Thames, the same report shows, found on 20 of the 21 sites where surveys occurred. Nurdles – small plastic pellets which are the raw material for the production of plastic products – have been found at nearly all the key waste hotspot sites. These are more commonly found on coastal beaches, and it is not clear whether they come from land or sea-based sources.

‘The presence of microplastic and polystyrene is a major issue in the Thames, too numerous to count and very difficult to remove via clean-ups,’ said Coode. ‘Microplastic will enter the food chain by being ingested by invertebrates, fish, mammals and birds.’

The Thames River Watch programme is funded by Tideway.