A photography competition, called #PictureBlueLondon, has been launched in celebration of London Rivers Week, which runs from October 23-31 – visit our full events list.

CPRE London, the countryside charity, is running the free-to-enter contest to capture the magic of the capital’s waterscapes from October 1 to November 26 for all budding photographers.

It puts the focus on London Rivers Week’s three themes, being access to nature, health and wellbeing and climate resilience.

The latter is a key topic of the sixth annual London Rivers Week, which happens just before world leaders meet for the COP26 Climate Summit in Glasgow, from November 1-12.

London Rivers Week is run on behalf of the Catchment Partnerships in London by the London Rivers Restoration Group. 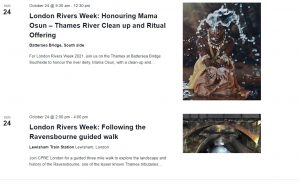 The evolving events list is packed with guided walks, talks, in-person clean-ups and visits, plus online webinars designed to inspire residents to cherish their blue spaces, understand the challenges they face and learn how these spaces can help humans. With dozens of events planned, it is something to bookmark now, with something for all the family. Activities range from visits to the Hogsmill sewage treatment works and nature open days to hands-on river clean-ups and a chance to learn about the joys of mudlarking, as well as a guided walk of the Illuminated River Thames.

Why not start, on October 23, by learning how 100,000 trees, being planted over two winters in Enfield, will help rivers and make the landscape climate resilient, on a fantastic guided walk of the area?

The photography competition helps to shine a lense on the cultural aspects of rivers and what they mean to different groups. This widely celebrated this year. One of several planned webinars is called London Rivers Book Club, while another focuses on the significance of rivers to British Bangladeshis. With the week overlapping with Black History Month, you’ll also have the chance to find out about honouring the river deity Mama Osun. 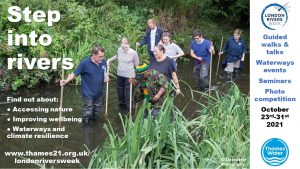 August’s Intergovernmental Panel on Climate Change (IPCC) report was damning in concluding that humans have caused climate change and that CO2 emissions have led to increasingly unpredictable weather patterns. This causes extremes such as flooding and drought.

Modelling by Climate Central, which has a Coastal Risk Screening tool quoted by Time Out after flash flooding in July, suggested that London could find itself subject to regular flooding by 2030.

London Rivers Week will celebrate how, since the turn of the century, 28 miles (45km) of London’s 400 miles of rivers has been rewilded or restored, for the benefit of biodiversity and as amenity spaces for people to enjoy. Among two dozen case studies are the Mayes Brook, Mayesbrook Park in Barking and Dagenham. At the UK’s first climate change park, a straight channel has been reset into a new winding course that flows through 1.5ha of floodplain. Woodland and reedbeds, new footpaths, play and fitness areas were created and 225 properties to the correct sewer pipes.

The week also has celebrity endorsement via Sam Lee, the folk musician, who is passionate about rivers and recently recorded a Radio 4 show Song of the Thames.

He said: “Rivers are our nation’s blood vessels. Yet so many are in such mistreated condition. Finding an unhealthy river is seeing all that is wrong in our society. What should be thought of as temples are treated like trash bins.

“I hope that one day all our watercourses will be thriving havens for nature and places humans can gather by, swim in, float upon knowing we will be happier and healthier for doing so. That one day we take as much care of rivers as we do our own homes.”

The main steering committee bringing you London Rivers Week this year are: The Environmnent Agency, Thames21, the South East Rivers Trust, London Wildlife Trust, ZSL, CPRE London, the Thames Estuary Partnership, Berkeley Homes and Thames Water, which also sponsors the week. Many other groups run and contribute to events, walks, talks and seminars to demonstrate the value of rivers.